He more recently composed the score for the National Ballet of Canada’s original full-length ballet Le Petit Prince (2016), and has since collaborated with choreographer Guillaume Côté on a second ballet, Dark Angels, commissioned by the National Arts Centre Orchestra. His music has been recorded commercially on many albums, including the JUNO-nominated fusion album Spin Cycle (Centrediscs), featuring the Afiara String Quartet and DJ Skratch Bastid.

The following note on Artemis is adapted from the composer’s note on www.kevinlaumusic.com:

In Greek mythology, Artemis, the daughter of Zeus, was the virgin goddess of wildlife. A deadly huntress who killed without mercy, she was also a lover of animals, music, and dance, and a symbol of fertility. She was the quintessential “untamed” woman: beautiful and alluring, but vengeful and unspeakably dangerous. Although men desired her, she kept her chastity, and those foolish enough to admire her too closely usually met with an untimely end.

Artemis is a musical portrait of the goddess in the manner of Gustav Holst’s symphonic suite The Planets, whose seven movements are based on the Greek deities’ Roman counterparts. The movement “Mars, the Bringer of War” was particularly influential in the conception of this piece. There are two places in Artemis that overtly reference the martial rhythms and harmonic progressions of “Mars.” At the same time, I sought to emphasize qualities which I thought would befit a more feminine warrior: speed and swiftness, lightness, agility. The “masculine” lower brass contingent is here replaced by a small but fierce percussion battery.

Artemis is divided into three sections which follow one another without pause. The first, “The Hunt,” is a tempestuous depiction of the goddess as she rains destruction upon her victims. Amidst the frenzy of percussion which launches the work, the horns sound a war-call in their lowest registers, signaling the goddess’s approach. The closing fugue is an ode to the goddess’s classical qualities—beauty, sophistication, and deadly grace. 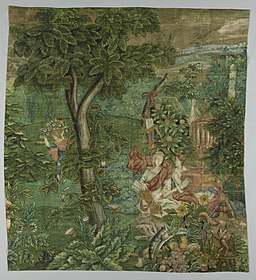 The title of the second section, “In the Pale Moonlight,” refers to Artemis’s designation as the Goddess of the Moon – her twin brother, Apollo, is sometimes referred to as the Sun God. Apollo and Artemis were born on two floating islands, which at times rose above the surface of the sea, and at times dipped beneath it. The music is a meditation on the goddess’s place of origin and her sacred woodlands, where only the “pure of heart” may enter.

Although the title of the third section, “Dance of Artemis,” is suggestive of the goddess’s lighter, more life-affirming qualities, it is in truth nearly as aggressive as the hunt itself. Only by the end do we realize that the violence has been transfigured into a kind of war dance, both celebratory and cruel. Swirling swings give way to a majestic statement of the “Artemis Theme,” at last revealed in its fullest form.

Rhapsody on a Theme of Paganini, Op.43

Since its publication in 1820, the final caprice of Niccolo Paganini’s 24 Caprices for Solo Violin, Op.1, has served as variation material for a large number of composers, from Brahms to Benny Goodman and from Liszt to Lutosławski.

Despite its Rhapsody title, Rachmaninoff’s contribution is in fact a set of 24 variations. This form probably made the construction of the work easier for Rachmaninoff, who was never at his most comfortable with the control of large-scale structures. Even so, it has been suggested that the Rhapsody resembles a piano concerto both in scope and shape, with the first 11 variations representing an opening movement, variations 12 to 18 corresponding to a slow middle movement, and the final six variations constituting a finale.

Composed between July 3 and August 18, 1934, the Rhapsody was first performed on November 7 of that year in Baltimore, with the composer as soloist and Leopold Stokowski conducting the Philadelphia Orchestra. It was not only an immediate success with audiences, but was also an instant hit with professional pianists, quickly becoming an indispensable part of the standard repertoire.

Somewhat unusually, Variation 1 (marked precedente) is played directly after a brief introduction, and before we hear the initial statement of the Theme itself.

In Variation 7 Rachmaninoff introduces the familiar Dies irae (“Day of Wrath”) quote; he used this motif so often in his compositions that it almost became his musical signature.

It is in Variation 18 that we hear the tune that everyone waits for and which has ensured the work’s lasting popularity. The famous melody is one of Rachmaninoff’s best; structurally, it is an inversion of the opening bar of the Paganini caprice.

Rachmaninoff was well aware of the melody’s quality, and of its commercial value: “This one,” he said, “is for my agent.” 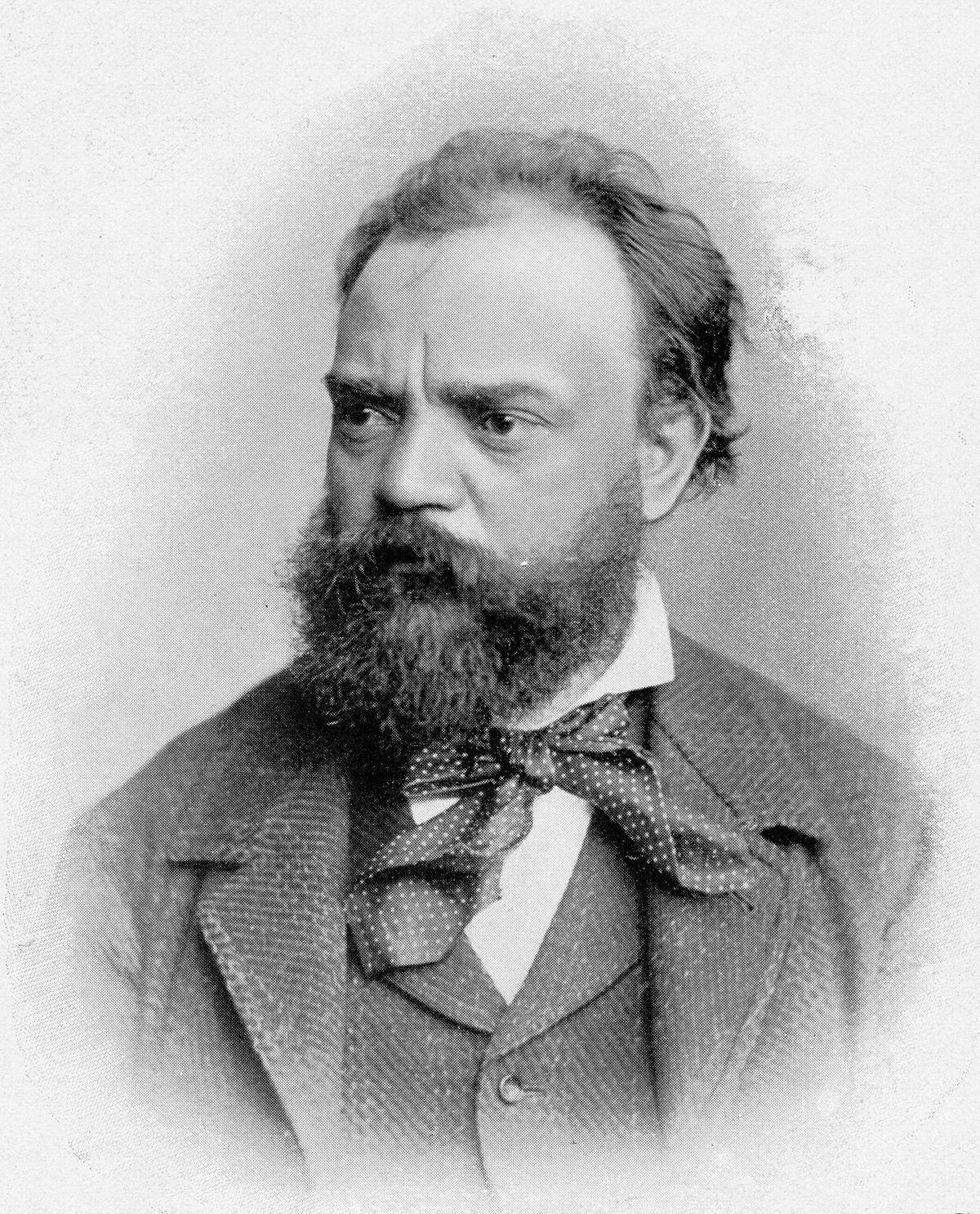 In April of 1891, not long after his appointment as Professor of Composition at the Prague Conservatory, Dvořák was approached by Mrs. Jeanette Thurber, the wife of an American groceries multi-millionaire. Mrs. Thurber invited the new professor to New York to become Director of the National Conservatory of Music, which she had founded in 1885. 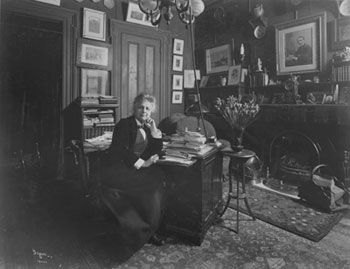 We do not know if it was owing to Mrs. Thurber’s persistence or to the size of the salary she was offering – at $15,000 per year it was over 20 times what he was earning in Prague – but by October Dvořák had changed his mind. Together with his wife and two of their six children he finally sailed for America on the SS Saale from Bremen, Germany on September 17, 1892, arriving in New York ten days later. The remaining children joined their parents at the end of the following May.

Dvořák spent two and a half years in the United States, finally returning to his Prague post in April 1895. Despite – or perhaps because of – acute homesickness, he produced some of his finest works during his time in America, including the New World symphony, the String Quartet in F-major (The American) and the Cello Concerto in B-minor, which was completed in Prague shortly after his return. He became a staunch advocate for New World folk music, championing, in particular, the songs and dances of Black and Indigenous Americans; however, it was decades before an “American” style of composition would take root in the imaginations of American composers.

The New World symphony was the first of the major American works, and clearly shows the influence of the composer’s new surroundings and his exposure to the folk music sources. The Bohemian element so familiar in Dvořák’s other symphonies is strong here as well, though, and it is difficult to tell if this is an American work by a Bohemian composer or a Bohemian work with American traits. Certainly Dvořák was less eager to stress the American aspects of the symphony when he returned to Europe than he had been while still in the U.S.

Paradoxically, while Dvořák never directly quotes any spirituals, the symphony did give America a new pseudo-spiritual. The famous Largo melody, which may itself have been suggested by the song Massa Dear, was in turn given words by one of Dvořák’s New York pupils, William Arms Fisher, and became (appropriately enough) Goin’ Home. 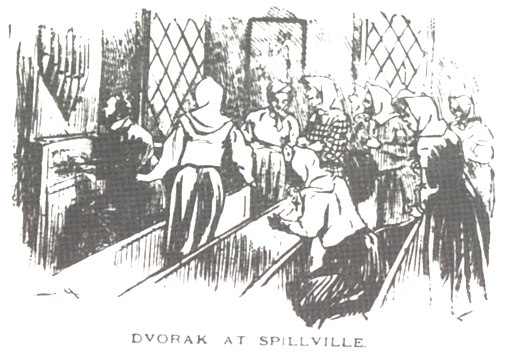 In early June 1893 the newly-reunited Dvořák family journeyed to Spillville, Iowa, a small town populated by Bohemian immigrants. Here, during that summer, the composer made the final touches to the orchestration of the symphony he had completed on May 24, the first sketches having been made the previous December. The work was first heard in New York on December 15, 1893, in a “public rehearsal” of the New York Philharmonic Orchestra conducted by Anton Seidl, the official premiere taking place the following evening.

Title Page of Symphony No. 9 “From the New World”

The work was an immediate critical and popular success and was greeted with wild enthusiasm, the composer having to take several bows at the end of the second movement. It was performed twice more that season and within two weeks of the premiere was introduced in Boston by the Boston Symphony Orchestra to similar acclaim.

Since then there has been no sign of its popularity decreasing; indeed, the New World is reputedly the world’s second most-performed symphony after Beethoven’s Symphony Number 5.

Orchestra Toronto will perform Autumn Celebration on October 21, 2018, at 3 p.m. For more information and to purchase tickets, visit the concert page.

Writer and reviewer Terry Robbins has written the OT programme notes since 1989. Terry has a monthly CD review column, “Strings Attached” in the WholeNote magazine, for whom he also writes the occasional article on the community musical theatre scene. He also plays violin and fretted instruments (guitar/banjo/mandolin etc.) for community musical theatre productions for groups across the GTA, and plays or has played in numerous orchestras in Toronto as well.

The Snowman and Friends: Programme Notes by Terry Robbins

The Winters of Childhood: Programme Notes

Freude! 50 Years After the Fall of the Berlin Wall: Programme Notes by Terry Robbins

The Snowman and Friends: Programme Notes by Terry Robbins

Congratulations to Julia Mirzoev, winner of the 2018 Marta Hidy Prize for Violin

Relaxed Performances are for everyone. For our December 9 performance of The Snowman and Friends,  ...
By Orchestra Toronto
November 19, 2018

An Orchestra on the Move